Bill Hellriegel received his Bachelor of Arts Degree in Philosophy from the University of Arizona, where he also completed his Master of Arts Degree in Teaching English as a Second Language. He has worked in the field of language education for 25 years, in both teaching and administrative capacities, and has experience in both the public and private sectors.

Bill spent the first eight years of his career outside the U.S, working two years in Spain and six years in Japan. After returning to the U.S, he spent a number of years at the University of California and then at the University of Minnesota. He has published and presented extensively. Bill is fluent in Spanish and in Japanese, and he also has proficiency in both German and Portuguese.

His research interests include teacher effectiveness, student success, and student choice of school. Bill loves spending time with his family, exercising, reading, and traveling. He became CESL's Director in January 2017. 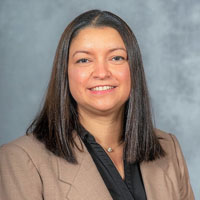 Lilia Angel-Post joined the CESL team in Fall 2014. She has had the opportunity to help CESL students in many different capacities such as admissions officer, adviser, immigration specialist, and, most recently, Interim Assistant Director. She is a native of Colombia but has called the United States home since her undergraduate years. Lili’s first degree is in architecture but her experience as a student worker at the Center for International Education instilled in her a love for the International Education field. Her passion for this field led her to eventually leave the architecture profession to pursue a career in International Education. Since then, she has enjoyed teaching Spanish and English to speakers of other languages, working as a medical interpreter, helping with migrant services, and learning about second language acquisition while earning her MA TESOL degree. She continues to grow as a professional by helping with CESL recruiting trips, serving SIU as the adviser for the Latin American Students Association, and participating in professional workshops offered by NAFSA, as a speaker or as a learner. In her free time, Lili loves to hike in the Shawnee forest with her husband and daughter, and to spend time with friends enjoying all the advantages of living in Carbondale, a small American town with a multicultural heart. 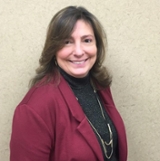 Rhonda Radford Joined the CESL family as part of the accounting staff in April 2018. Rhonda earned an Associate Degree in Accounting and Computer Science from John A. Logan College in 1993. After graduation, she started her accounting career at Crab Orchard Golf Club and worked there for 15 years as the office manager. She became a part of Southern Illinois University in July 2006 after her two children, Jamie and Jimmie, graduated from high school and went on to college and to the military. In 2012 Rhonda earned her Bachelor’s Degree at SIU in Information Systems, graduating cum laude and specializing in computer programming, but her true work passion is her accounting career. Her current interest includes preparing for retirement and spending time with her husband, children, and grandchildren. 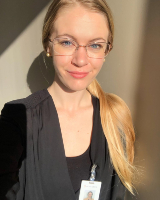 Lizzy Henderson received her bachelor’s degree from the University of Missouri Kansas City in English Rhetoric and French Language and Literature in Summer 2019, while studying abroad in Lyon, France. She will complete her Master's Degree in Linguistics and TESOL at SIU in Fall 2020. Lizzy has three years of experience tutoring one-on-one with ESL students while working for the Johnson County Community College Writing Center in Overland Park, Kansas. While studying at SIU, she hopes to research how globalization and the the rapid evolution of English will affect future ESL students and TESOL methods. In her spare time, Lizzy likes to cook new vegan recipes and is currently planning for her upcoming wedding in the Spring.

Alysh is from Kewanee, Illinois. She is a 2018 graduate from Eastern Illinois University where she received a B.A. in Spanish and a B.S. in Communication Disorders and Sciences. Alysh is pursuing her Master’s degree in Communication Disorders and Sciences at SIU. She hopes to one day be a school speech-language pathologist in the Southern Illinois area. In her free time, Alysh enjoys being outdoors, hanging out with friends, and staying active.

Sina moved from Germany to the USA when she was 8 and started learning Spanish a year later. Today, she is fluent in three languages – German, English and Spanish. She is currently in her third year of her undergraduate studies and, in May 2021, will be graduating with her B.S. in Fashion Design and Merchandising with a specialization in Design. Sina’s interests include learning new recipes, card games and reading. In her free time, she likes to sketch, hang out with friends and play Dungeons & Dragons.

Vlad moved to the Unites States from Burgas, Bulgaria on his 14 th birthday. Before he attained his associate in science degree from John A. Logan College in Carterville, Illinois, he taught English and early childhood development classes in Guangzhou, China. He’s currently pursuing two degrees at SIU – a B.S. in Fermentation Science and a B.A. in Languages, Cultures, and International Studies with a specialization in Classics. He is bridging the gap between these very different fields of study with the new Ancient Practices Minor. His interests include brewing, ancient languages, and board games. In his free time, Vlad likes to research new beers, write articles about burgers, play Dungeons & Dragons, and hang out with his two pet rabbits.